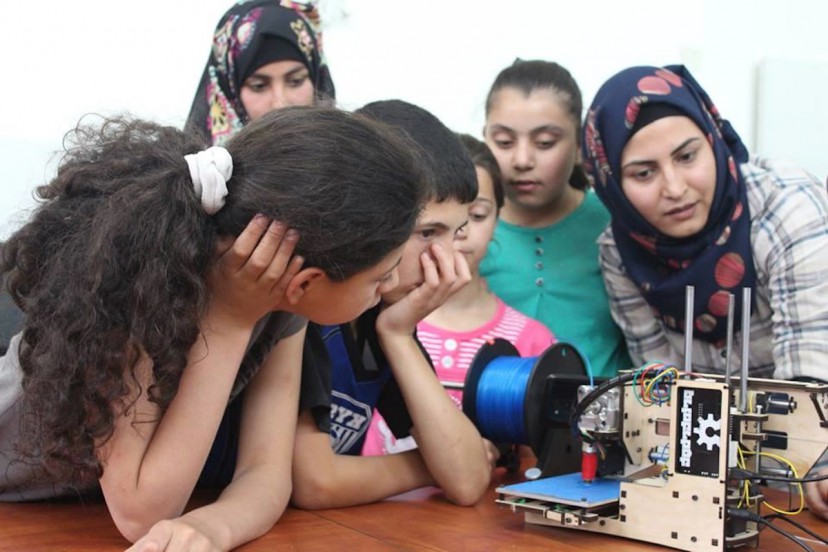 We’re back again for a status report on HCI@Palestine! We’ll go through quite a bit of stuff in this blog post, ranging from 3d printing up to the separation wall, so let’s get started:

Well, since the main reason why we are here is to work with kids and our 3d printer, it’s only fitting that we talk about this first: We are happy to report that things go quite well! We now have successfully completed two 3d-sessions in the al-Am’ari computer club as well as one in the Jalazone club (the sessions are only once a week). As we hoped, the kids and the volunteers are pretty fascinated by the innovative 3d printing technology and are happy to try everything out!

We started out by introducing and explaining the printer in an approachable manner, e.g. by avoiding fancy words like „Fused Deposition Modeling 3d-printer“ and instead comparing the machine to a hot glue gun on steroids and with computer control – which is not only easier but actually pretty accurate. We also showed sample printouts as well as ran a live demo print.

After answering some questions from the kids (relating to printable materials, cost of the printer, etc.), we then moved on to 3d modelling and connected it to the 3d printer mentally by emphasising that we will print out the cool stuff they come up with. We use CubeTeam as a relatively easy and approachable 3d modelling tool (go ahead, give it a try! It’s free and fun. Like virtual Lego!). It is quite similar to the video game Minecraft – cube-based, collaborative, easy and fun – but unlike Minecraft, it is not only free but explicitly geared towards 3d modelling in that it exports the appropriate file formats and also runs in the browser. That’s quite essential, given that we don’t have much computing power to work with and all the computers here are only clients connected to two servers. Unfortunately, server maintenance and configuration isn’t exactly the best around here and a lot of drivers are missing which is why we ran into issues with 3d rendering. We had to improvise and use only some of the PCs as well as our notebooks but after we managed to get everything up and running, the kids started to play around with CubeTeam and even after a relatively short time, we saw and see progress (as well as fun, of course 🙂 ). A few preliminary for those of you who are interested:

We are very happy that the kids successfully built models appropriate for printing – which we did, of course! They were even more productive than our little Printrbot was able to keep up with, so we have homework in the form of some very cool models made by the kids which we will print during the course of the next week and then bring them to the kids next weekend! Very, very cool stuff! 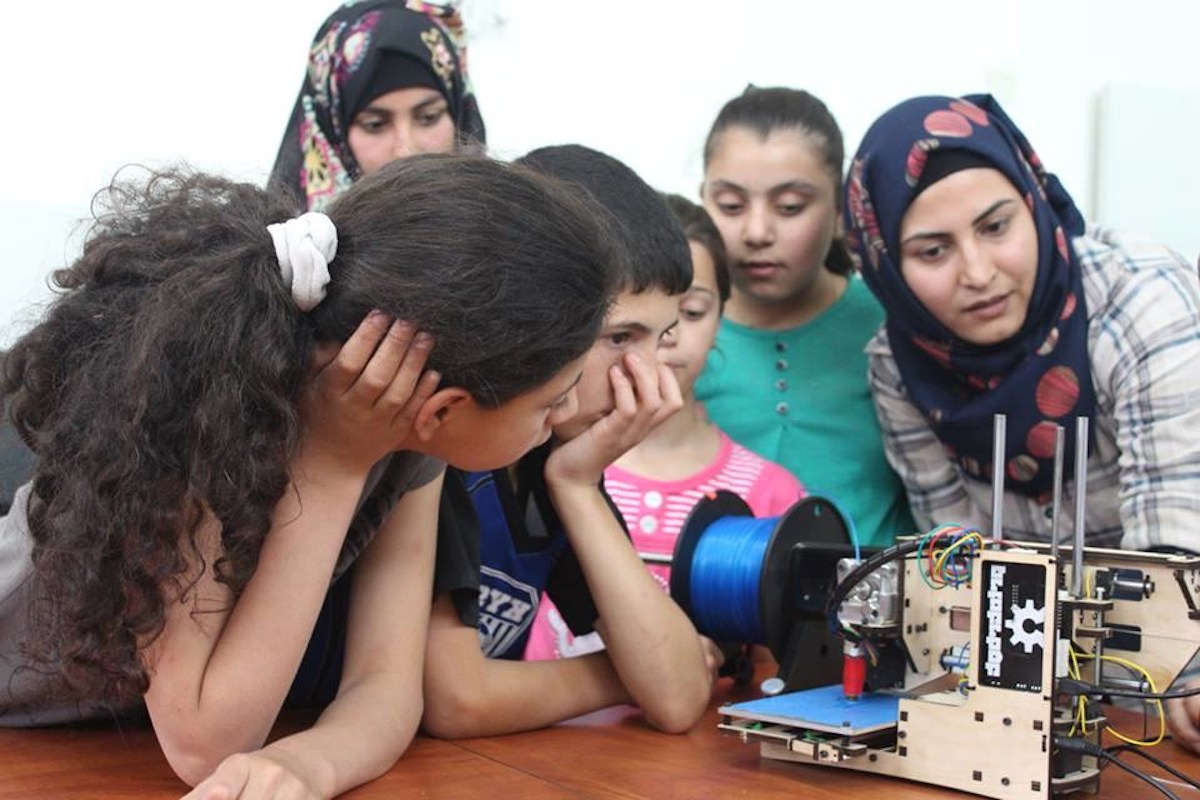 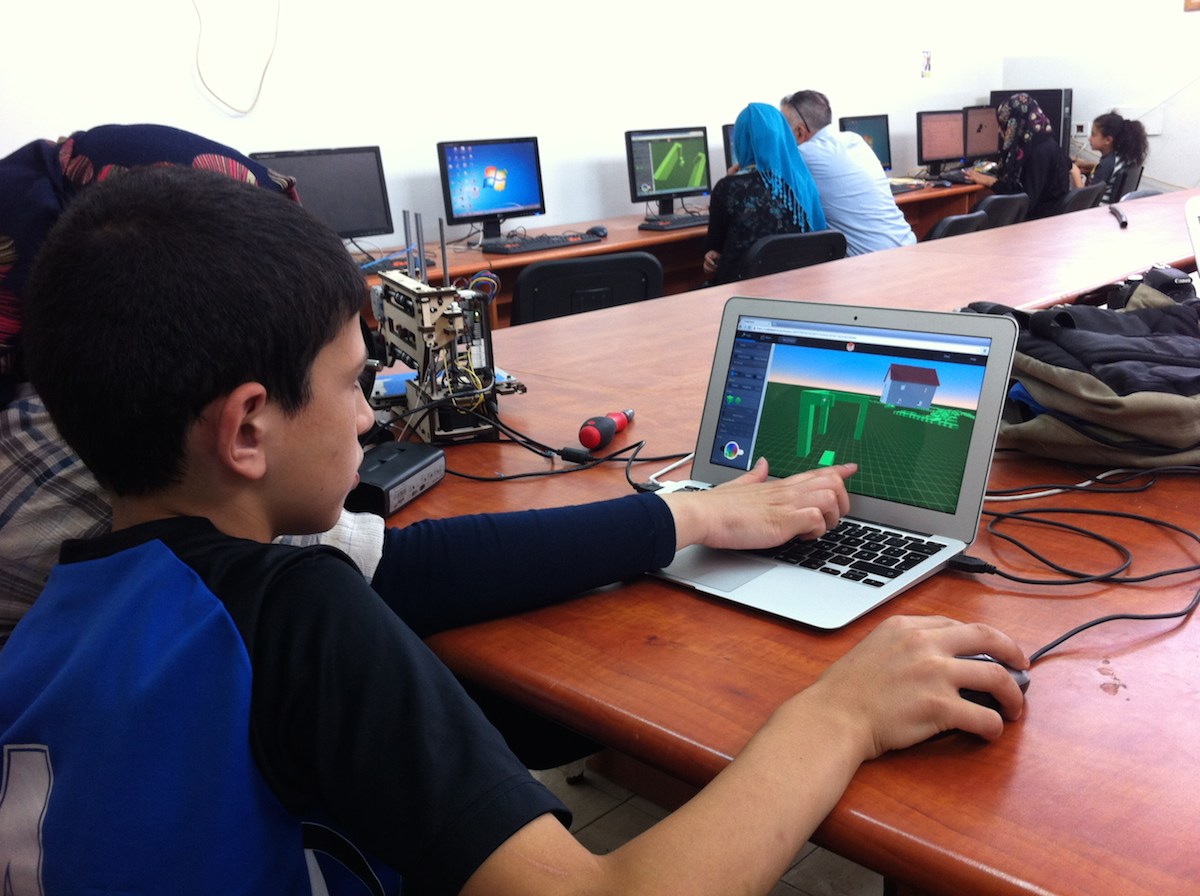 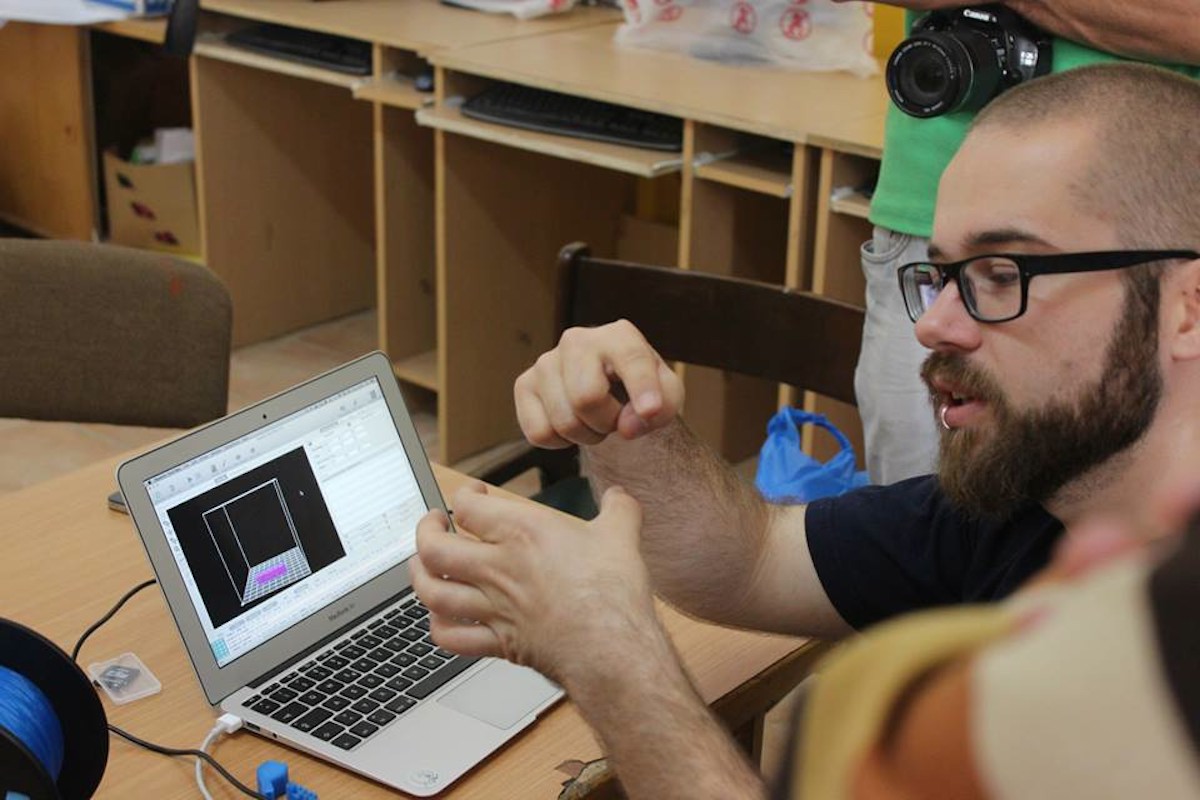 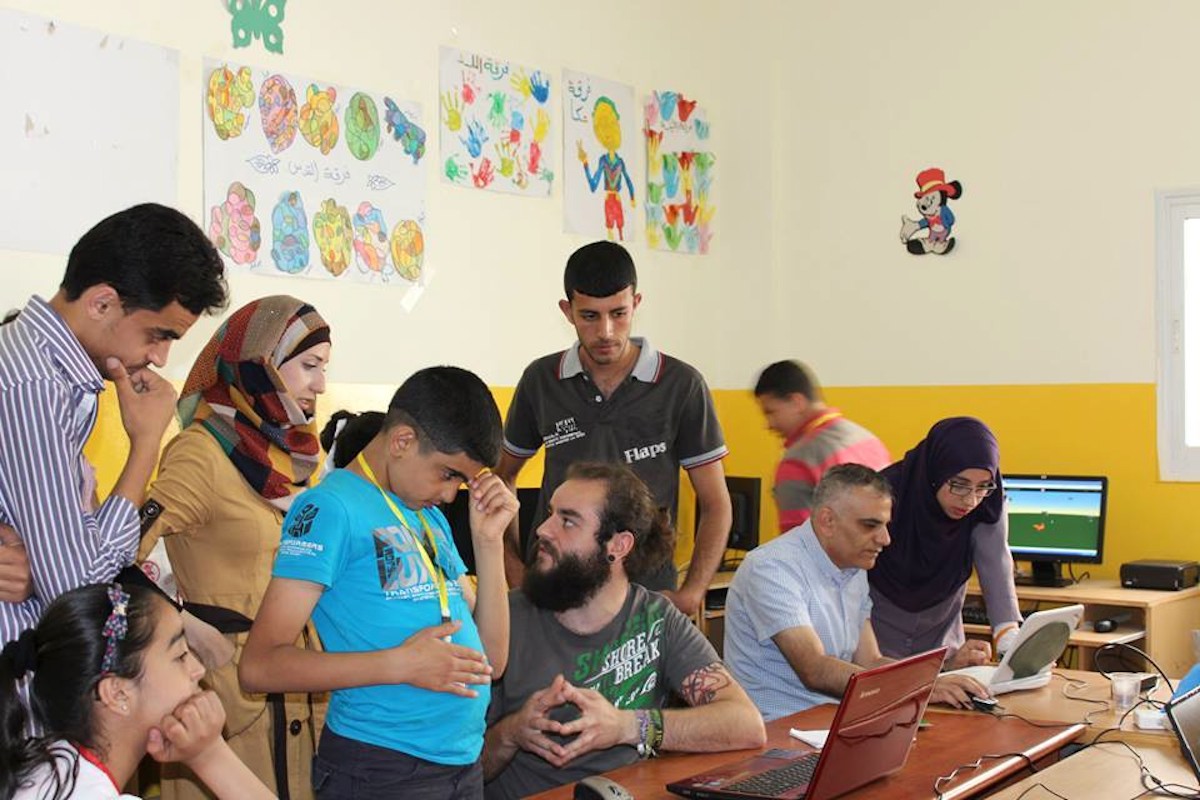 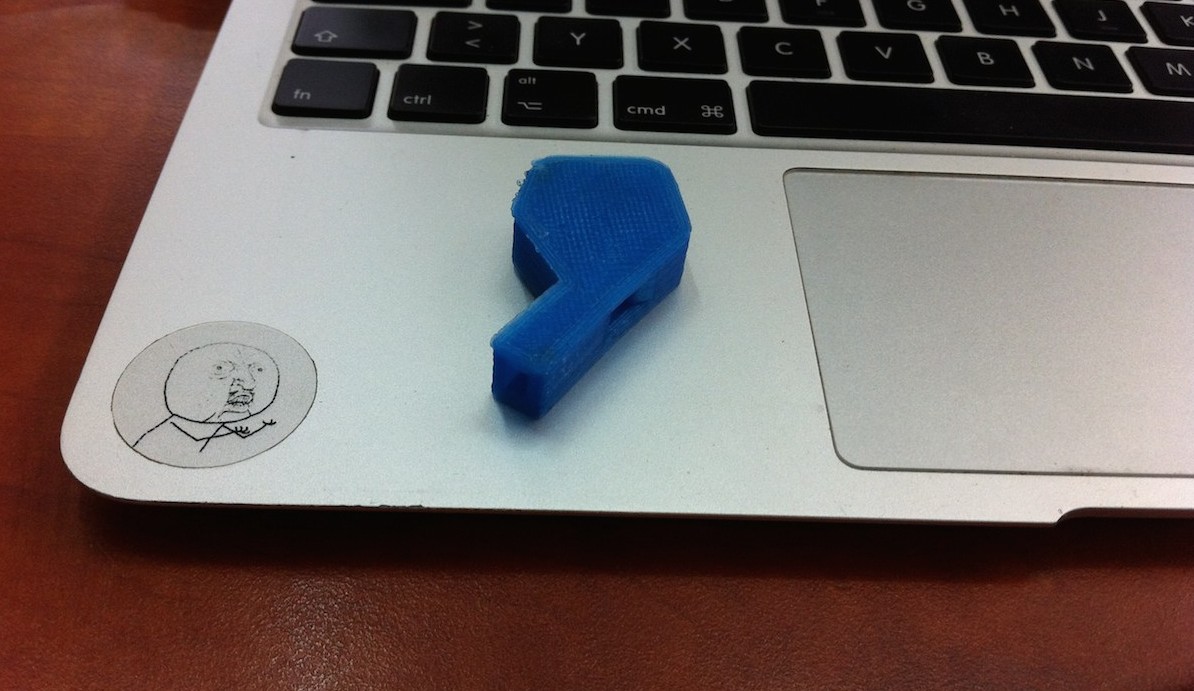 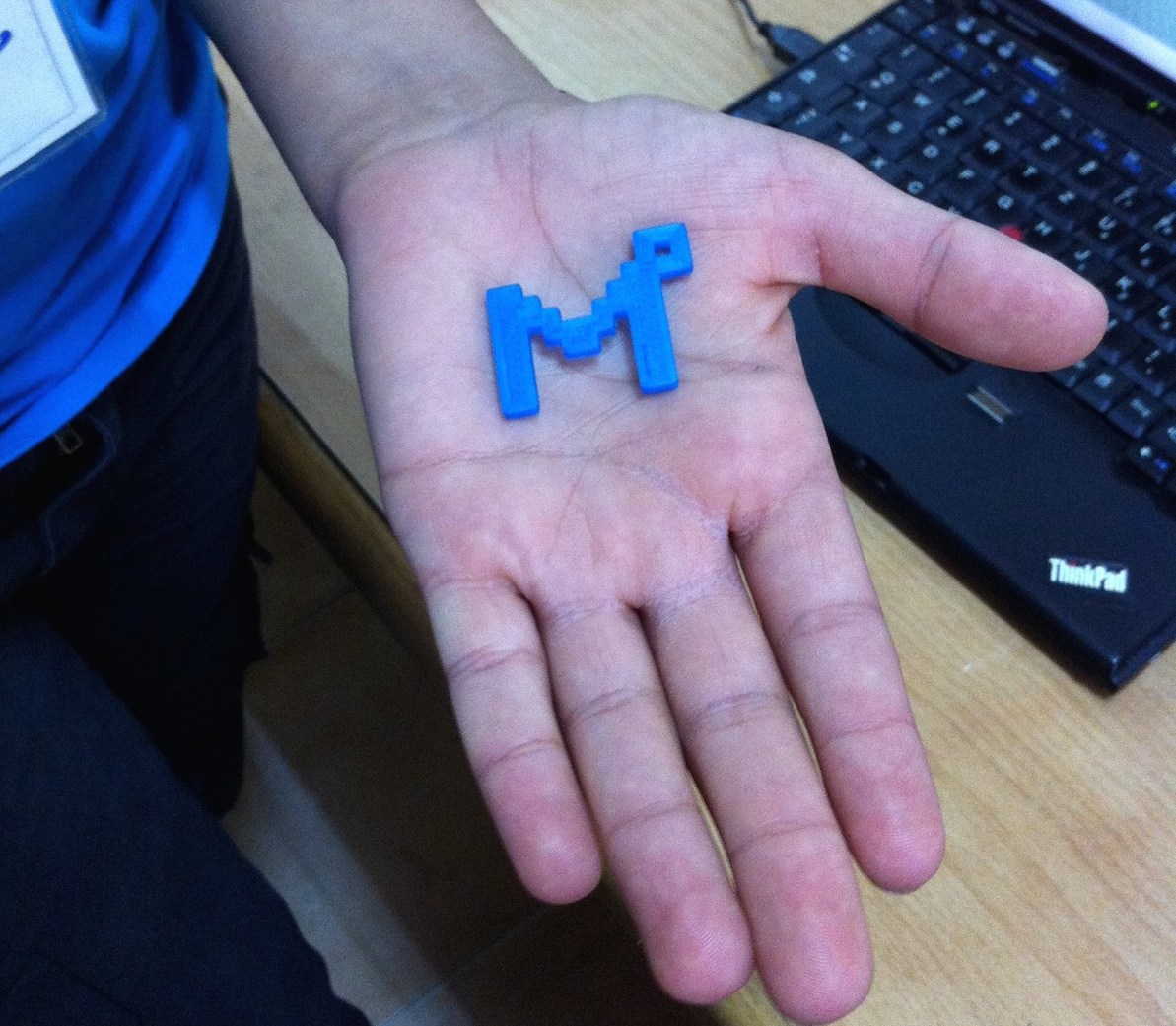 Another cool thing! The Westfalenpost, a local newspaper from back home approached us for a news article which we of course agreed to. We did a Skype interview (with scenic taxi honking in the background) and you can read the final article online here or have a look at the photo of the real-world article we attached! Apart from newspapers, our Tweets have also been received well, even by Reddit Palestine! 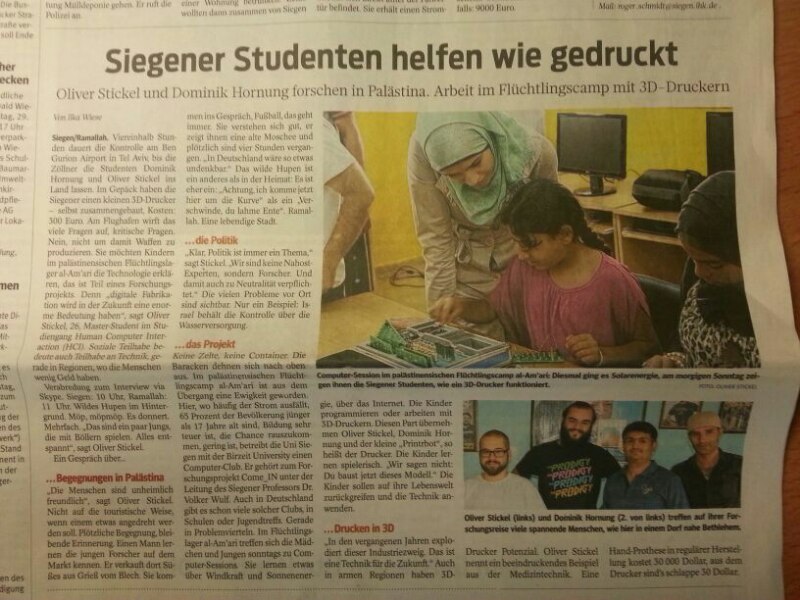 We don’t just stay in Ramallah, of course. One station on our trips was Bethlehem via al-Masara. The latter is a small village which has a very active demonstration scene against the Israeli West Bank barrier, which is a high wall constructed / under construction by Israel, separating their / their claimed territories from the West Bank. Palestinians are not allowed to cross without a permission which is hard to come by, so they have to drive meandering detours around the walled areas. This leads to situations like our drive to Bethlehem which takes about one and a half hours by public transportation  from Ramallah instead of the 20 Minutes it would take without the wall. Actually, it can even be way more than 1.5hrs because there are lots of fixed as well as flying checkpoints manned by Israel and it is completely unpredictable if, how often and for how long one will be checked. It has to be noted, that those checkpoints are not actually on Israeli soil but in the so called C-Zone which is Palestinian territory but completely controlled and policed by Israel. Seeing the wall, the security checkpoints and the heavy military presence is quite intimidating.

In al-Masara, we have a few connections through previous trips by our colleagues. As stated above, the village – or, to be precise: Two very big families in the small village – are very active organising demonstrations against the wall and regularly host visitors from abroad. We are welcomed in their home, get a tour of the village and later head towards Bethlehem with some of the locals. There, we get a private tour of the city which has a lovely, if relatively small souq (outdoor market). Through our hosts‘ good connections, we also get to visit a church which is located directly opposite a mosque. It is quite a sight to see the bell tower and the cross and the minaret only a few meters away from each other – a symbol for peaceful coexistence of faiths. The church is very colourful inside and its courtyard and balconies are quite beautiful. After that, we head on to the nativity church where Jesus was allegedly born. It’s pretty packed with tourists which probably has something to do with the impending visit of the Pope (Francis posters are everywhere…). Also beautiful but we are not used to the amount of tourism and, to be honest, busloads of camera-toting people kind of spoil the experience a bit, even if we are tourists, too. We then head back to al-Masara where we get invited to traditional Palestinian lunch – everything is home-grown, by the way – which is delicious. 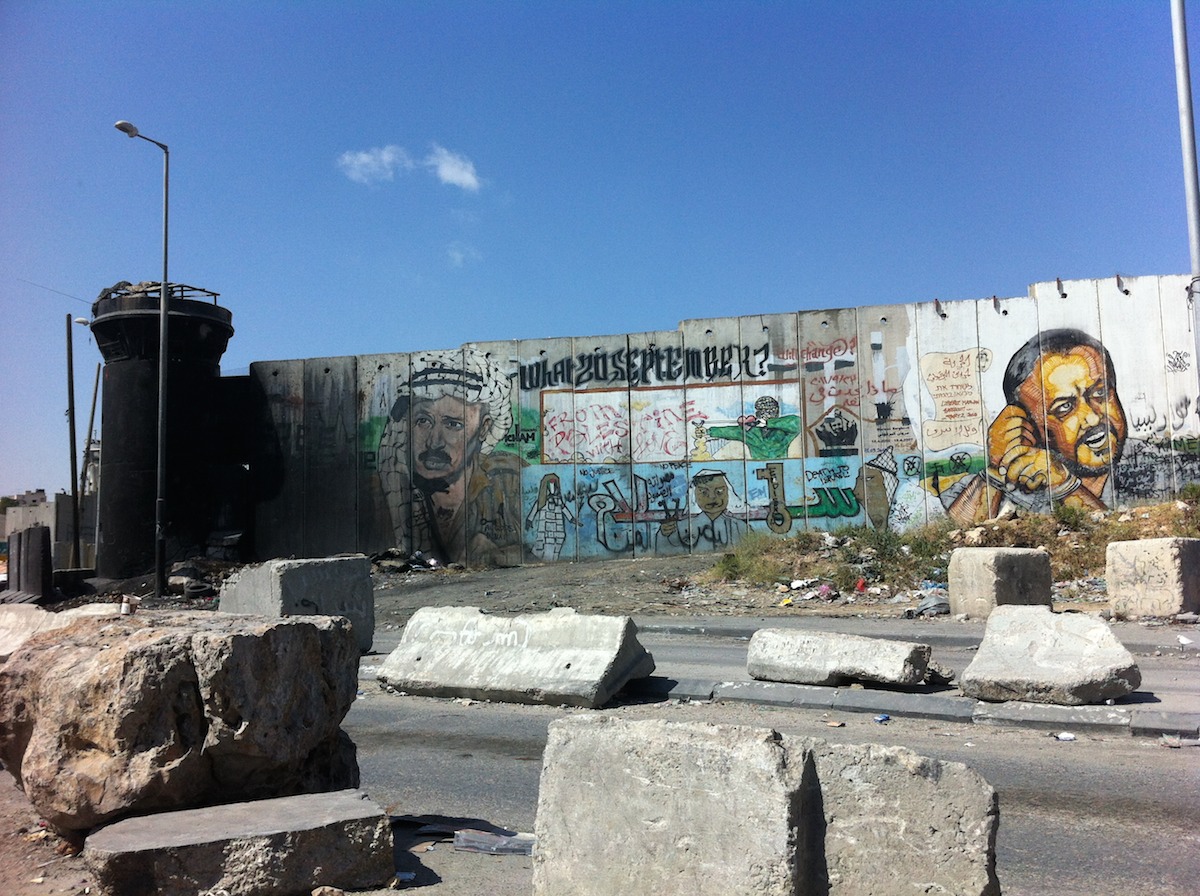 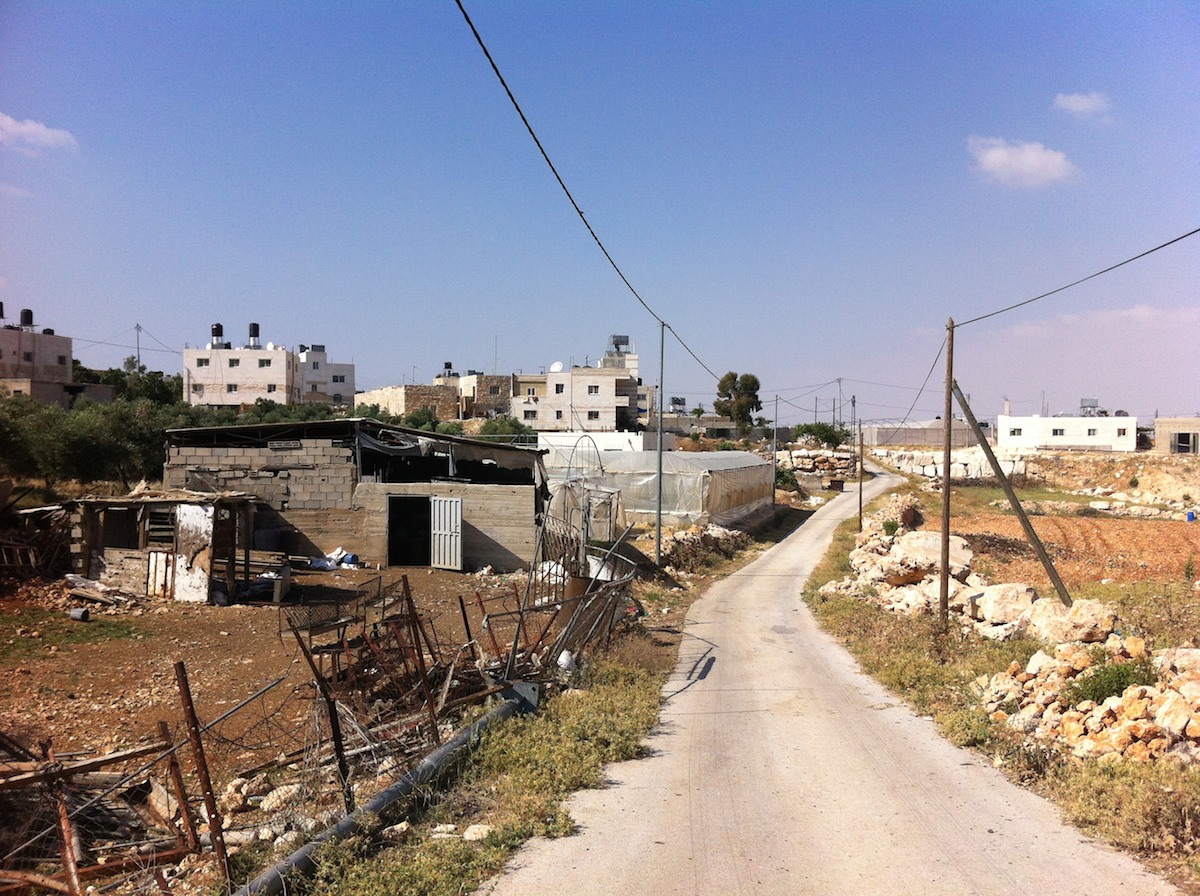 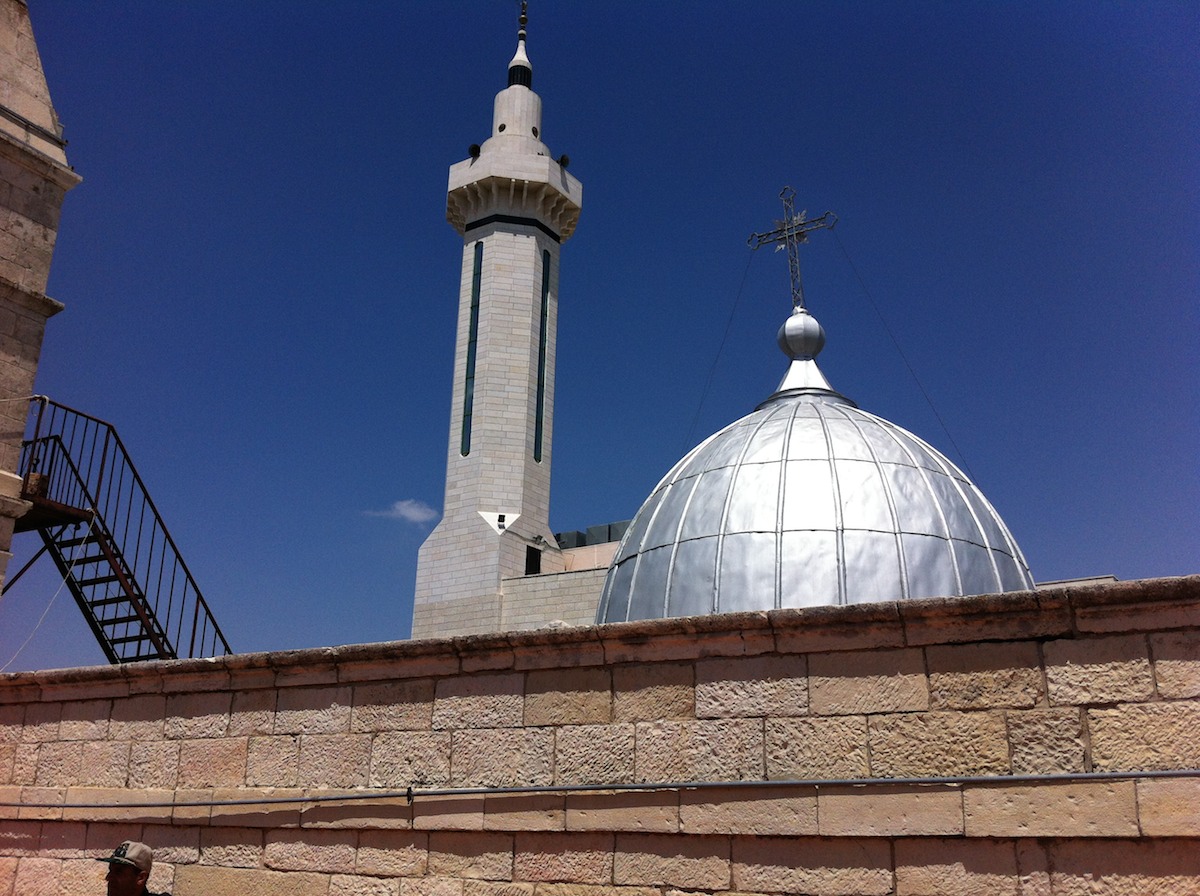 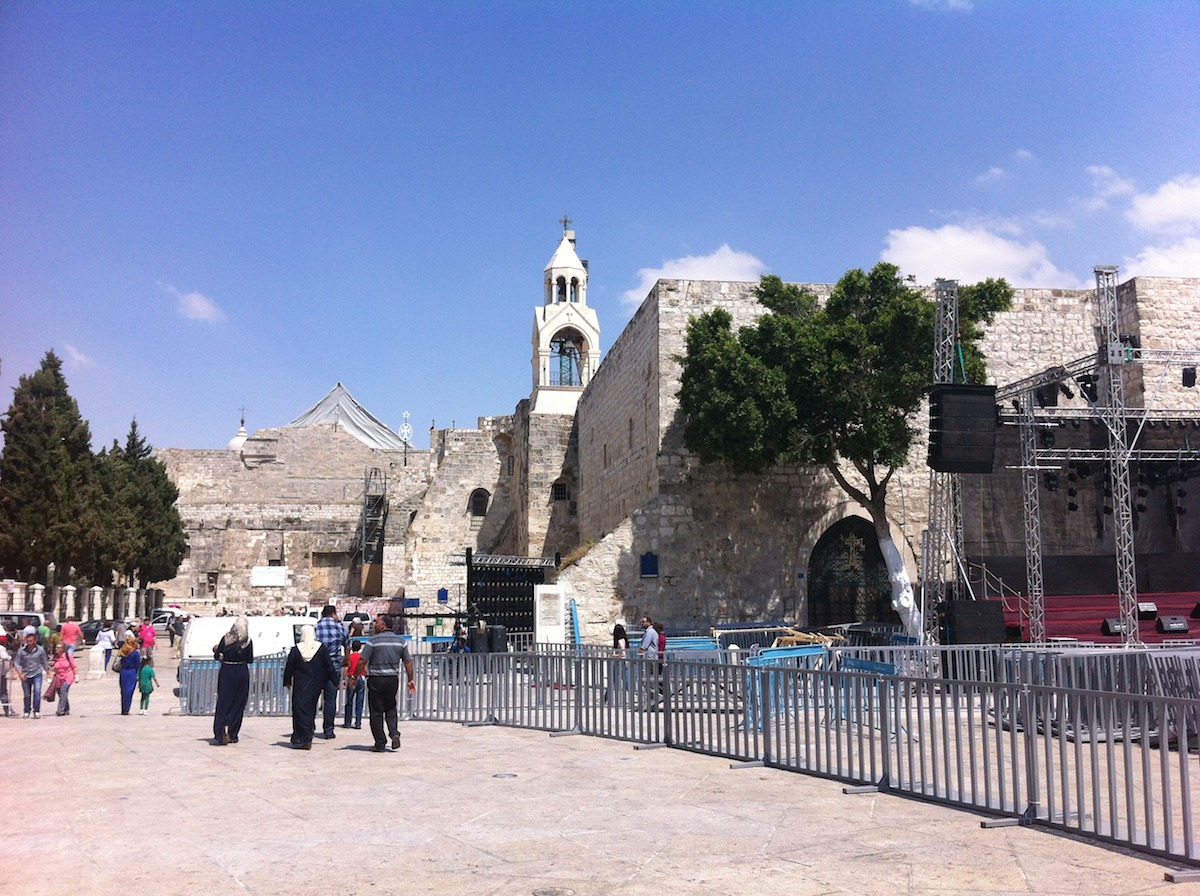 A few days later, our next trip together with local volunteers and staff from the computer clubs brings us to Jericho, the „oldest city in the world“ – although, apparently, there is some scientific dispute about this. The drive there is a beautiful one through the desert with its barren but fascinating, mountainous landscape. In Jericho, we walk and drive around the small and tranquil city, see a lot of banana and citrus plantations and then head on to the only cable car in the world which is below sea level (as is the whole of Jericho). It leads up to a greek orthodox monastery built into the mountain itself. The monastery is still in use, so we even see some monks and one of them lets us in the small chapel which has a balcony with a fascinating view over Jericho. Down in the city, we go for some lunch (Falafel and Hummus, of course, eaten by hand, not with fork and spoon) and then head to a local park where we spend most of the rest of the day in the shade with cool drinks since it is really, really hot – the temperature peaked at about 43°C. No matter, we have quite a lot of interesting discussions about the West and the East, travel, women’s rights, Alcohol and other things on which the perspectives differ very much. On our way back, in the car between Jerusalem and Ramallah, we see our first real clash between Palestinian protesters and the Israeli army. We can’t see exactly what is going on but there are soldiers, armoured vehicles and tear gas is being shot across the street – quickly, we drive through and fortunately are not stopped, hit by stones or tear gas – nevertheless, a bit scary, even if it’s pretty much business as usual here.

We continue to learn a lot here and are still amazed at the friendliness and openness of all the people we meet. Finishing anecdote in point: When we went out to grab a bite to eat a few days ago, yet another hour-long talk with random locals on the street occurred, the topics ranging from study opportunities around the world up to tattoos and – of course – the local political situations. It’s amazing – when was the last time you had a spontaneous conversation of more than 30 seconds with a random stranger on the street in Germany? 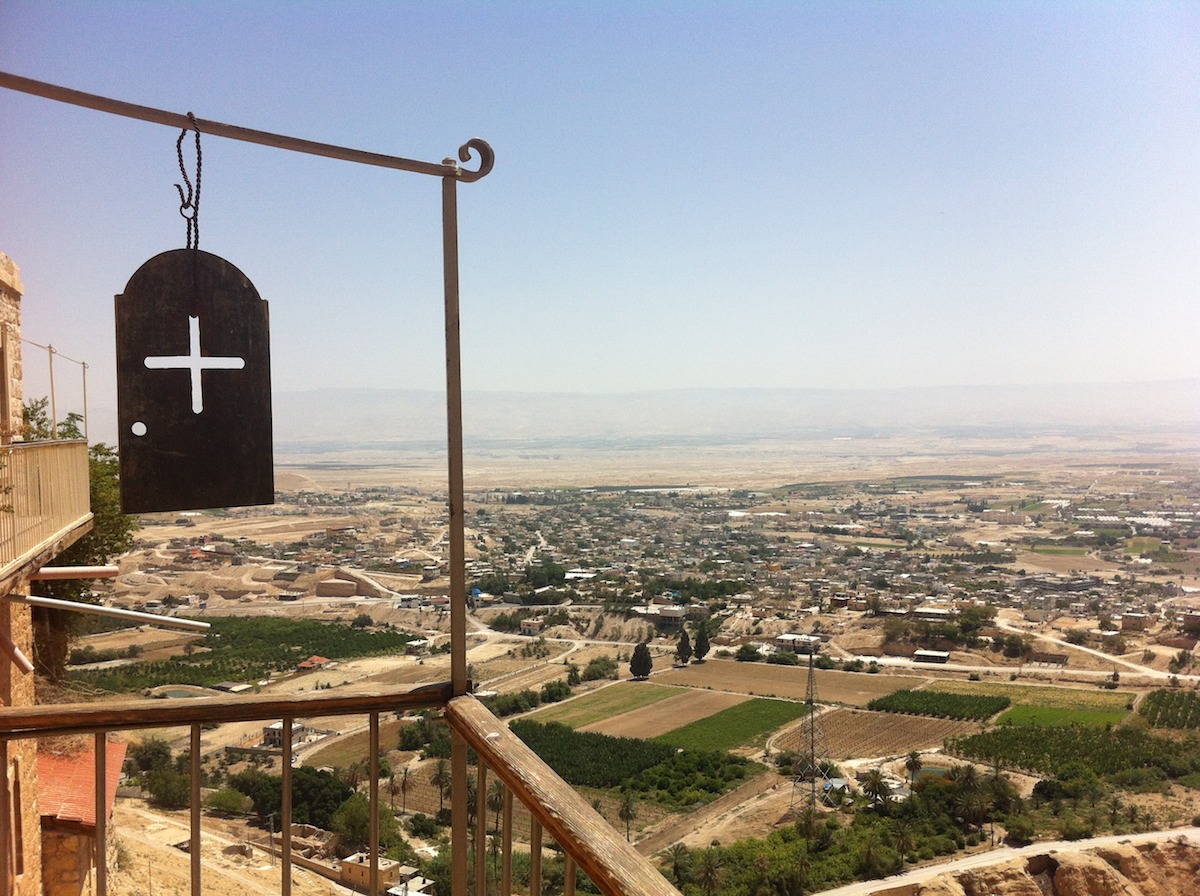 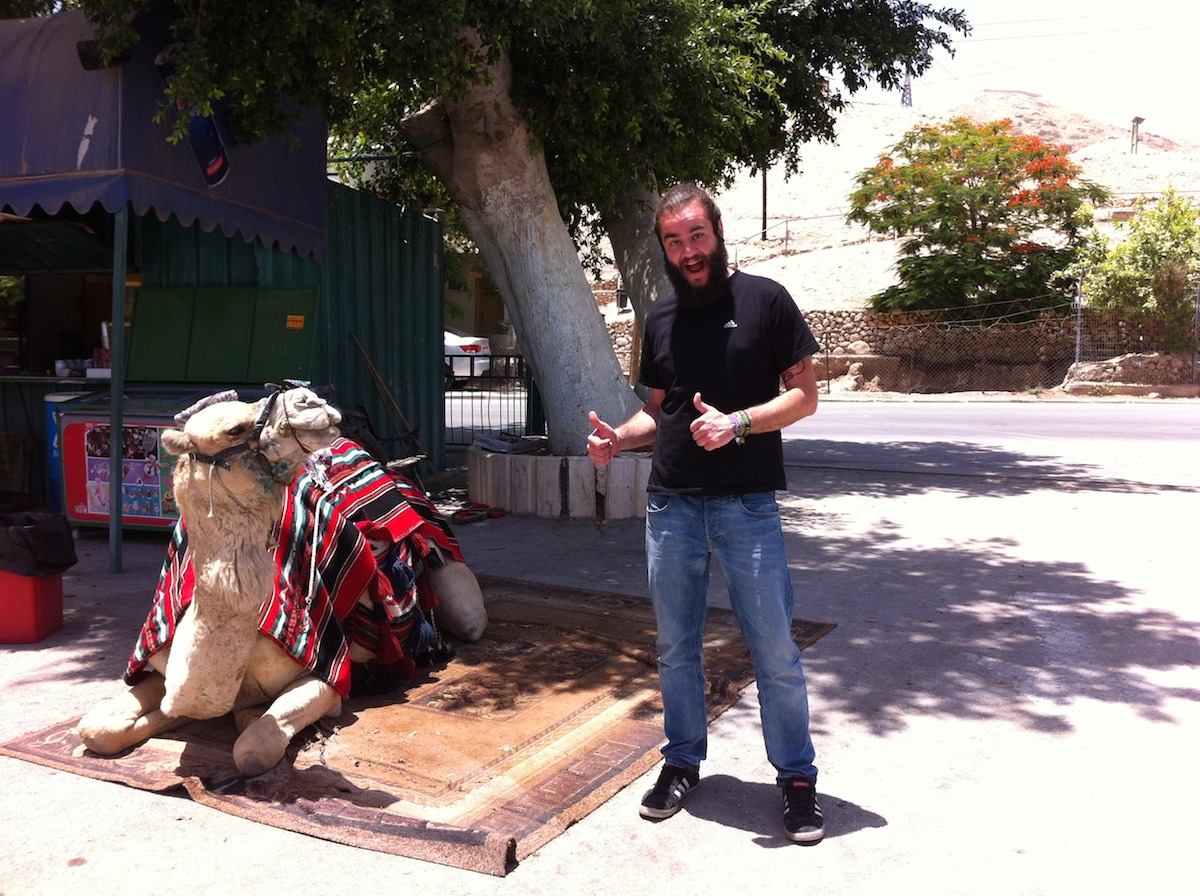 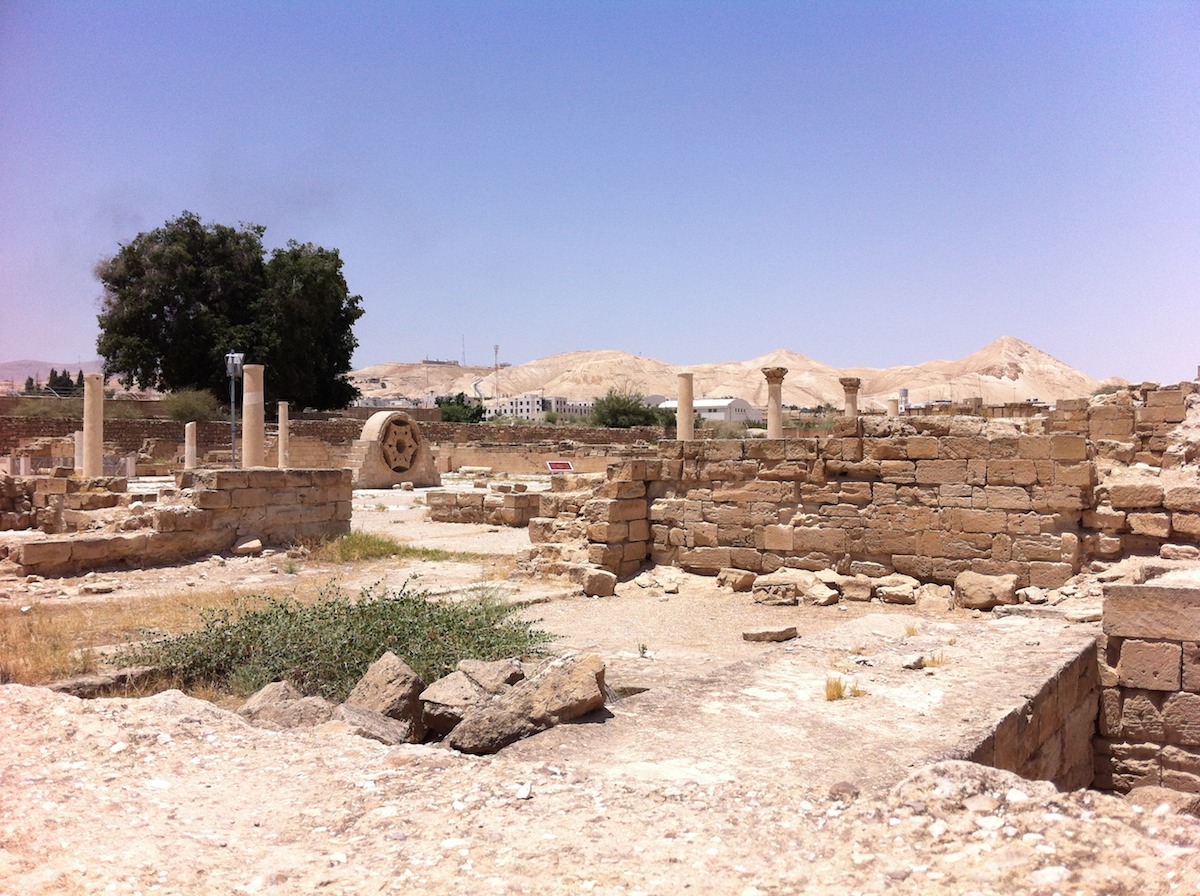 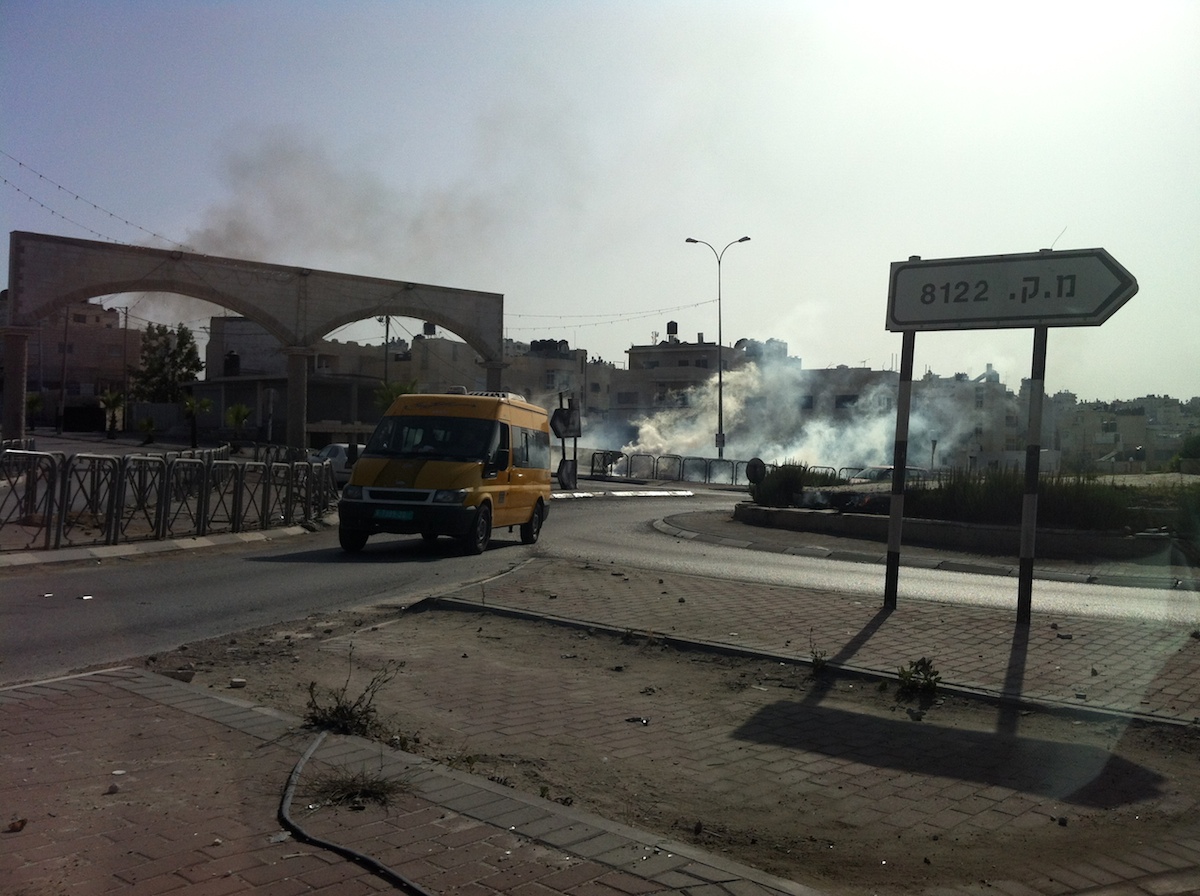